Reasons Why Wicker Park Is A Great Place To Live

Artists and professionals — lured west by cheaper rents than could be found in Lincoln Park and Old Town — made Wicker Park a bohemian-chic hot spot in the 1980s. Its trendiness was firmly entrenched when MTV filmed a season of “The Real World” there in 2001. Many of this neighborhood’s shops and hangouts feature prominently in the current Netflix series, “Easy,” a low-key comedic love letter to Chicago’s coolest locales.

If you’re looking into Chicago living, the search has to include Wicker Park’s hip array of vintage single-family homes, funky apartments and modern lofts — especially if you’re into checking out what’s new and unique in a neighborhood of enterprises that value small pleasures and independent treasures.

Here are some of the reasons that Wicker Park is a great neighborhood:

Wicker Park is either the place to be or place to be-adjacent. It’s ranked as one of the fifth-most-walkable neighborhoods in the city — due to its fantastic layout for public transportation and biking.

Wicker Park is surrounded by equally on-trend enclaves such as Bucktown, Logan Square, Ukrainian Village, Humboldt Park and Old Town. The 606, a percolating recreational trail, contributes to the walkability and bike-friendliness of the neighborhood. Two Blue Line stations provide easy access to Chicago’s “L” trains. North Avenue grants instant access to I-90, which could have you enjoying lakefront dining in 90 minutes — in Kenosha, Wisconsin or New Buffalo, Michigan.

The Wicker Park Historic District — surrounding the triangular public park that neighborhood developers Charles and Joel Wicker donated to the city in 1870 — was designated a Chicago Landmark in 1991.

Hoyne Avenue — known as Beer Baron Row for its large number of opulent homes built by brewery owners, and Pierce Avenue, in particular — offer some of the city’s best examples of late 19th- and early 20th-century Victorian architecture.

The 606 is, at 2.7 miles, the longest converted greenway from a former elevated rail line in the United States. It has 12 access points, including four along Wicker Park’s northern border, and bubbles with permanent and temporary artworks and performance spaces.

The park for which the neighborhood is named is nearly 5 acres and features a fieldhouse, a children’s playground with an interactive water feature, ornamental community gardens, a dog-friendly area, a baseball field, basketball courts, and a field used for soccer and football.

In a city full of festivals, Wicker Park Fest is an annual standout. The longest street fest in the city — occupying more than a half-mile of Milwaukee Avenue between North and Ashland Avenues — this three-day July bash features 50-plus bands, interactive art installations and 100-plus vendors.

Wicker Park embraces the boutique culture. Though Milwaukee Avenue has a big box or two, this is a place where, among many other options, you can find:

Big Star will cure your craving for elevated takes on Mexican street food. Whether it’s a deconstructed lobster roll or chocolate tower French toast, Bongo Room has you covered for brunch.

Small Cheval’s menu is limited to insanely good burgers, fries, shakes and cocktails. The Violet Hour, a proudly pretentious cocktail lounge, doesn’t allow cellphones or baseball hats, but will dazzle you with its pre-prohibition-style libations. Rock out at Subterranean.

7. It Can be Forever

Ten Chicago Public Schools are in the Wicker Park/Bucktown area, along with seven private schools. You can start here sharing an apartment and grow into a homeowner.

If you’ve decided the “where” is Wicker Park, let us help you with the “when.” Contact us today. We’ll find the perfect place in no time. 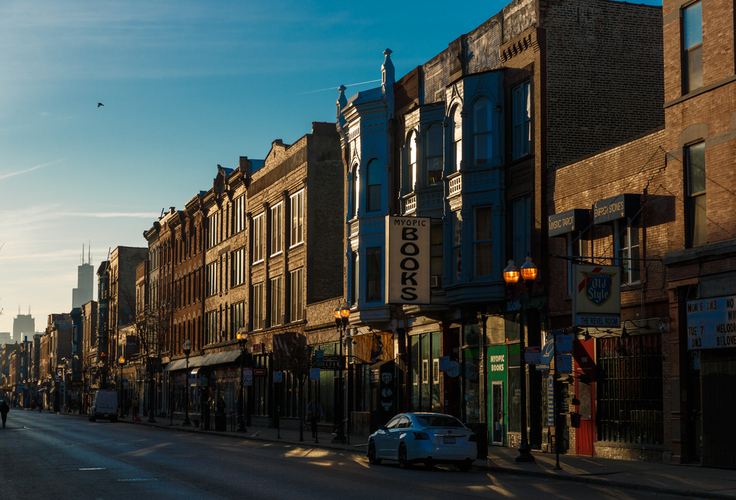