Chicago is everything: City of Big Shoulders and of intimate neighborhoods, home to blue collars and high culture, where the residents can point you to the best Italian beef or the nearest Michelin star with equal alacrity. Living in the Second City is an adventure of the first magnitude.

Here are 10 facets of the diamond that is Chicago.

All the sports: You’ve got the Bears, Blackhawks, Bulls, Cubs, White Sox and Fire covering the major pro sports. If just making the scene is your thing, Wrigley Field is one of the oldest venues in sports and the United Center is one of the most frenetic. Northwestern University provides bowl-caliber football just across city limits in Evanston, while Loyola and DePaul universities offer big-time college basketball north and south of the Loop. And if you’re running devotee, more than 44,000 of your like-minded friends took on the Chicago Marathon in 2018.

All the brains: University of Chicago and Northwestern University are two of the most prestigious universities in the country. University Village, around the University of Illinois-Chicago campus, is a diverse and energetic neighborhood, while DePaul University’s Lincoln Park campus is as much a part of that neighborhood as the bordering green space. DePaul’s Loop Campus, Columbia College and Roosevelt University flood the South Loop with students, creating something of a college town in the heart of downtown.

All the seasons: As the saying goes: “Chicago has two seasons, winter and construction.” As the other saying goes: “Don’t like the weather? Wait 10 minutes.” The truth is, few cities are as beautiful as Chicago in the summer. Seeing the city come to life at the first blush of spring is inspiring. Sweater weather can prompt an easy day trip in any direction to see the fall colors or pick apples. As for that other season, well, there’s a certain pride in surviving a Chicago winter and the very specific ways of reserving a parking space you’ve meticulously shoveled out.

Transportation: Two major airports — one on the north side, one on the south — serve the city. Rail lines and the interstate highway system recognize the city as a Midwest hub. In 2016, bicycling.com named Chicago the Best Bike City in America for its many miles of dedicated bike lanes and trails and its expansive bike-sharing network. Whether you’re cabbing it, catching a CTA bus, riding the El, taking a carriage ride past Water Tower or a bicycle rickshaw in Wrigleyville — or enjoying a sightseeing cruise on the Chicago River or Lake Michigan — Chicago has a way to get you there.

The greatest lake: Chicago has done a terrific job of making Lake Michigan a gem to be shared by everyone,. From Jackson Park on the south to Edgewater Beach on the north, the 18-mile-long Chicago Lakefront Trail offers dedicated biking and pedestrian paths over the length of the city’s most scenic real estate. Many of Chicago’s public treasures hug the lake, from the museum campus to Navy Pier and Grant, Millennium and Lincoln parks. Whether you’re taking a dip off North Avenue Beach or finding a perch on Northerly Island from which to watch the Fourth of July fireworks, there is plenty to enjoy.

Art appreciation: The Art Institute of Chicago houses an incredible collection of works from every conceivable movement. The Museum of Contemporary Art has a narrower focus but is no less spectacular. Beyond that, Chicago’s dedication to public art affords up-close glimpses of thousands of works, from Millennium Park’s Cloud Gate sculpture (known affectionately as “the bean”) to statues honoring historical figures and modernist sculptures by Picasso and Miro. Beyond that, Chicago embraces its varied architectural history and the art in its edifices is a gift to be unwrapped over years.

Food: A reasonably ambitious walker could have lunch in Chinatown, a snack and a visit to the National Museum of Mexican Art in Latin-tinged Pilsen, dinner in Little Italy and dessert in Greektown. A seriously ambitious diner could have a third Chicago-style hot dog (always with celery salt, never with ketchup) or a generous slice of deep-dish pizza. An incredibly ambitious restaurateur could attempt to join Chicago’s crop of 22 eateries that have earned at least one Michelin star as of 2018

Culture: According to the New York Times, Chicago has emerged in recent years “as the go-to city for Broadway tryouts.” That’s not to mention the city’s percolating theater scene, which along with the Lyric Opera, Chicago Symphony Orchestra, The Second City, Joffrey Ballet and Hubbard Street Dance barely scratch the surface of all that Chicago’s performing arts community offers.

Neighborhoods: Chicago is a city of neighborhoods — roughly 200 of them.; some maintain the character and cultures of their founders, some have evolved to reflect the roots of their current residents; some are devastatingly hip, some are immune to changing trends. Whether you’re considering Andersonville or Old Town, Bucktown or Ukrainian Village, Printers Row or River North, there’s a neighborhood that’s sure to feel like home.

The best fests: Taste of Chicago draws more than a million visitors to Grant Park each year. The Chicago Blues Festival celebrates the music first electrified on the city’s South Side. Pride Fest is the annual weekend-long celebration of Chicago’s LGBTQ community. There are fests that celebrate music, art, literature, different foods and various ethnicities. In fact, by city hall’s count, there are more than 400 neighborhood festivals in Chicago each year.

Ready to Move In?

Whether you’re considering a brand-new high-rise in Lakeshore East, an artist’s loft in River North or an elegant Gold Coast condo, the experts at Downtown Apartment Company can help. Contact us to get started. 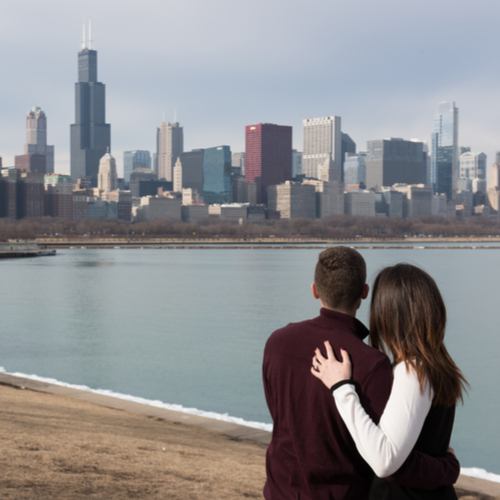