Whether you’re looking to commute downtown to the Loop, out to the suburbs, or to the furthest stretches of the Earth, the West Loop is outfitted with so many transit options that it makes most commutes a breeze.

Whether you take the Metra to the suburbs or the Amtrak even further, both Ogilvie and Union Stations are right on the boarder of the West Loop.

The blue line train runs through West Loop at UIC on Halsted and on Clinton, providing a quick and efficient way to get to O’Hare, taking you anywhere in the world! Skip the unpredictable rush hour traffic on I-294, save your Uber fares, and take the blue line instead!

Catch the green and pink line trains the the Loop at Ashland and Ogden, on Clinton and Lake, or at the Morgan Street L station, which has been in operation since the 1800s and is located right on the bustling Restaurant Row strip on Randolph Street. The green line is also a convenient way to Rush Hospital and University.

It seems like half of rush hour traffic is sitting in the downtown area before you even get on the highway. Live in the West Loop and skip it with the nearby highway entrances on nearly every block from Ogden to Van Buren. Hop directly on I-94 or I-294.

If you work from home and don’t commute, the West Loop could still be the most convenient neighborhood for you, too. There’s no shortage of co-working spaces and coffee shops. 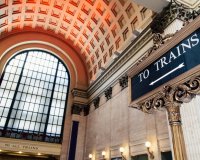