Onni Group brought its first development to Chicago less than 5 years ago and has already taken the city by storm. From the wildly successful lease up of their first development, The Hudson, in River North, this year’s River North delivery, 369 Grand, and of course the multi-phase three tower development at Old Town Park, it seems that Onni has cracked the code in terms of giving Chicago renters exactly what they want. Hallmarks of Onni’s developments include top tier condo grade finishes and some of the highest quality appliances on the market in every unit, thoughtful amenities like ample work-from-home areas, pet amenities, and 24/7 package receiving, and extra touches of luxury, like spa inspired Himalayan salt saunas, oversized hot tubs, basketball courts, music rooms, sparkling water on tap, grand lobby spaces, herb and produce gardens for residents, and having multiple outdoor pools in a single building so residents can find their own poolside “vibe”.

With all these successful lease ups, Onni is not slowing down anytime soon and has multiple projects in the pipeline. One project that has garnered recent attention is Union, at 354 Union Avenue in Fulton Market. Upon completion, Union will be approximately 400 feet and will offer 373 luxury rentals as well as 143 parking spots. Union is being designed by architecture firm, Pappageorge Haymes. 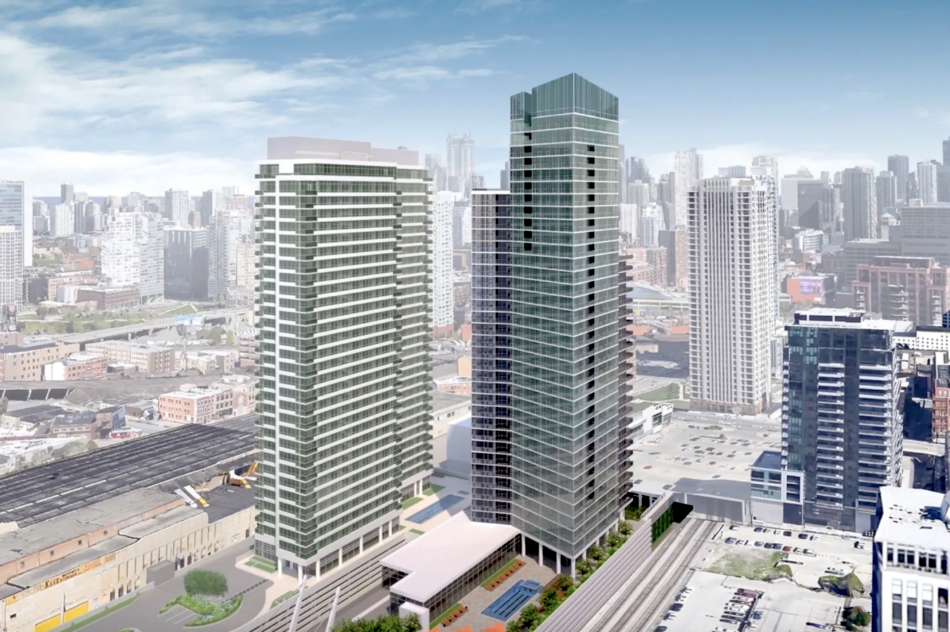 A rendering of 354 N Union Avenue courtesy of Pappageorge Haymes

The development at 354 N Union Ave broke ground this past April and is expected to take two years to complete. Early sketches and renderings suggest Union will have a host of state of the art amenity spaces, including an expansive outdoor pool deck. The finished high rise is expected to have a sleek, glassy exterior with aluminum balconies and metal accents.

Like neighboring building, K2 Apartments, Union will have a pedestrian bridge providing direct access to the adjacent Jewel Osco supermarket as well as several other shops in the same plaza including a pet supply store, nail salon, dry cleaner, bank, and more.

In addition to convenient grocery store access, Union will be in an incredibly convenient location overall. With both the highway entrance and the CTA blue line to O’Hare and downtown just two blocks away, lively Fulton Market street just one block away for Chicago’s best dining and nightlife, and ample coffee shops, parks, and boutique fitness studios, the location doesn’t get much better than this.

Fulton Market has been a popular destination for Chicagoans and visitors alike for several years because of its high density of world renowned restaurants, nightlife, and the charming neighborhood feel created by its cobblestone road, low rise brick lofts, and artful nods to its meat packing district roots. However, the past three years have also seen a significant boom in Fulton Market office space development. With numerous high-end office buildings popping up on what seems to be a monthly basis, it makes sense that the demand for residential development has grown in tandem. Between the hot location and Onni’s stellar track record, Union is sure to be a hit!

Looking for luxury new construction apartments for rent in Fulton Market? Contact us today! One of our neighborhood experts will be happy to answer your questions and guide you in your search. We are now offering in person, self guided, and virtual apartment tours.