The West Loop Old Main Post Office has been closed since 1996, but following the recent major redevelopment, is now welcoming its first tenants in the newly revamped building at 433 W Van Buren.

The structure was first built in 1922 and greatly expanded in 1932. At the time, Montgomery Ward and Sears were the largest retailers in the United States and the post office needed to expand its capacity due to all the mail order traffic the two retailers brought in. There were a few variations on proposals for the building’s redevelopment from 2011 to 2014, but none that secured the proper funding. In the interim, when it was not being used as a post office but prior to the redevelopment, the Old Main Post Office was used in filming for Batman Begins, The Dark Knight, and Transformers: Dark of the Moon films.

In 2016, Mayor Rahm Emmanuel threatened that the city would take possession through eminent domain if it remained undeveloped. The owner, Bill Davies, sold the Old Main Post Office later in 2016, just one day before his passing.

The 2.8 million square foot building has already secured large tenants including Walgreens, which will be relocating from Deerfield, as well as Ferrara Candy, The Federal Home Loan Bank of Chicago, and Uber. The lobby at the Old Main Post Office will also feature a food hall which is open to the public. There will also be a plethora of tenant amenities, including a bar and bocce court on the second floor, a gym with free weights and a boxing ring, and scattered luxury meeting and co-working spaces throughout the building.

The mail chutes have been repurposed as architectural accents.

Roughly 16,000 new employees will work in the building, stimulating the Southwest Loop area along the river, where office buildings and high-rises meet.

The Old Main Post Office redevelopment is consistent with the trend of corporate relocations and new amenity filled office construction in the West Loop. 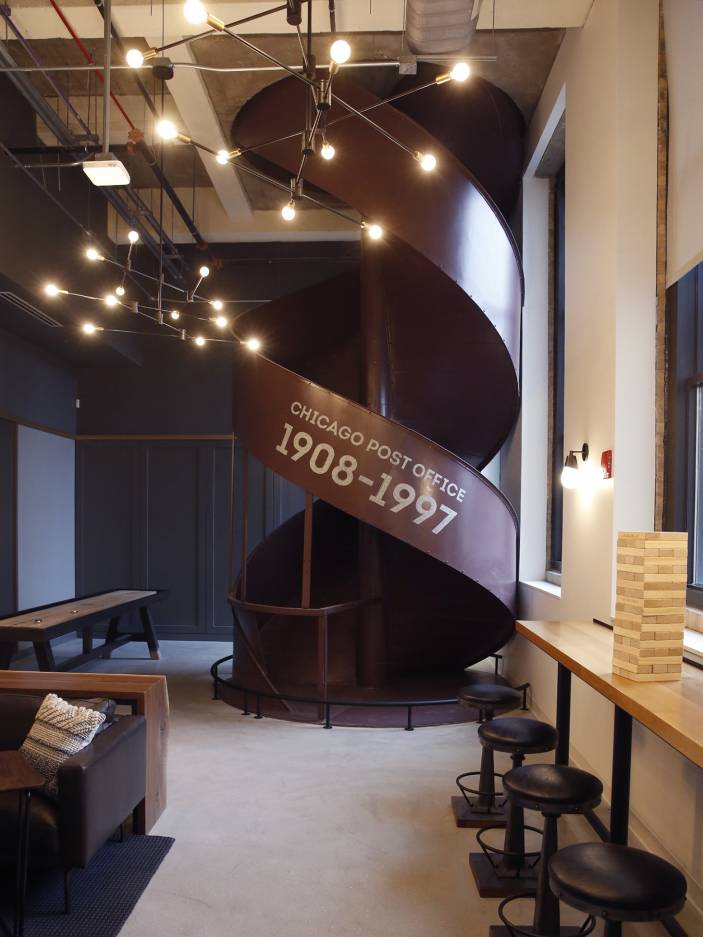