The West Loop has been an attractive spot for corporate relocations the last two years. McDonald’s garnered significant attention in 2018 when it moved its headquarters from its home of 47 years in Oakbrook to downtown Chicago’s West Loop neighborhood.

The new headquarters office building was built at the former site of Oprah’s Harpo Studios. The relocation brought over 2000 jobs downtown and had a positive impact on this year’s earnings. CEO Steve Easterbrook says the move downtown was motivated by a desire to become a more modern company by tapping into a wider range of top talent and being hip with trends in food and beverage– both things he hopes will be improved by being being centrally located right on Randolph Street. Easterbrook also noted that the downtown move has had a positive impact on recruiting. McDonald’s received over 200,000 job applications sine their relocation, which is a large increase from years prior.

The new McDonald’s headquarters features a restaurant with menu items from around the world which is open to the public. The second floor houses Hamburger University, where McDonald’s trains its managers. The third floor has a test kitchen for new potential menu items and the sixth floor has an employee cafe with co-working space, a barista style coffee bar, and an IT help bar. Over 300 conference rooms equipped for audio and video, cafe style meeting spaces, unassigned benches and cubicles, and large meeting spaces are scattered throughout the building to promote collaboration. The innovative headquarters has multiple open floor plan sub office “neighborhoods”, each with private phoning rooms, tables, meeting rooms, and lockers. Last but not least, the ninth floor features a fitness center and terraces overlooking the city.

Looking for luxury apartments from rent near West Loop? Contact us today! We’d be happy to keep you in the Loop! 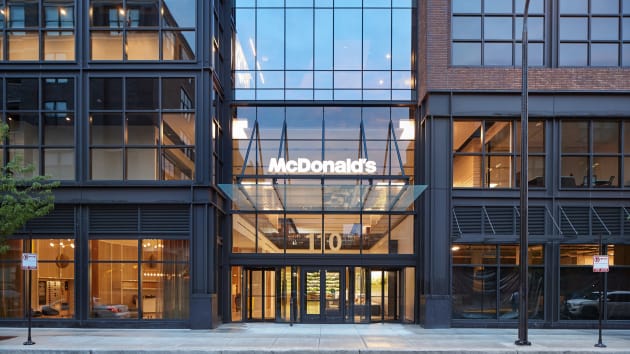