Why Demand for Industrial Sites is Soaring Amongst Residential Developers

There are currently over 2,700 residential units planned for development in the West Loop. What’s even more amazing is that all of this new construction is being absorbed, as the population of the neighborhood has tripled since 2000. If you haven’t noticed, the majority of the latest West Loop developments have addresses all beginning with 160 (i.e 166 N Aberdeen, 160 N Elizabeth, 160 N Morgan, and let’s go ahead and include 170 N Green). While the new development at 906 W Randolph is choosing to use its Randolph Street side address, this site is also currently known as 160 N Peoria. This isn’t just an entertaining coincidence– it’s indicative of the vector of movement in development trends.

A “160” address puts those sites on side streets north of Randolph before Fulton Market, showing that these side streets are a hot commodity with developers, likely for two reasons: the first is the city’s design guidelines. Section 3.4 of the city’s West Loop Design Guidelines state that, “Randolph Street should continue to be developed as a commercial and retail corridor and the existing retail and restaurant character should be preserved. Tall residential buildings located along Randolph Street should be set back towards the center of the block and not front directly on Randolph Street.” This could explain why developers who want their residential developments as close as possible to lively Randolph Street would need to opt for the side streets, but it doesn’t explain why developers are mainly choosing the side streets to the north.

In addition to often being less costly, these industrial sites are also popular because of the Fulton Market Innovation District Plan (FMID). The FMID allows for areas that were formerly zoned as industrial to used for more “modern uses” like high end office space, mixed use, and residential developments.The city enacted the FMID at the beginning of 2021 to, “create a more vibrant, pedestrian friendly, and inclusive neighborhood”, likely in response to the area’s booming population. You can read more about the FMID here. 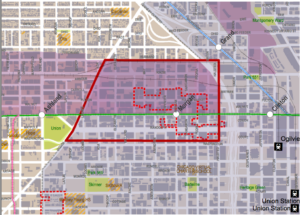 The red outline designates the boundary of the FMID, Courtesy of the City of Chicago

Despite the city’s willingness to allow for zoning changes in some of these industrial areas, the city is still making it clear that certain industrial spaces are off limits to residential developers, for instance, the Kinzie Corridor just northwest of Fulton Market.

As development moves north to Fulton Market, west toward, Ogden, and spills into the FMID designated zones, we wouldn’t be surprised if a few more developments with 160-ish addresses pop onto the map. 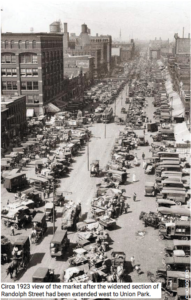 Randolph Street in 1923 when the area was primarily industrial, Courtesy of the City of Chicago

Looking for luxury apartments for rent near the West Loop? Contact us today! One of our neighborhood experts will be happy to answer your questions and guide you in your search! 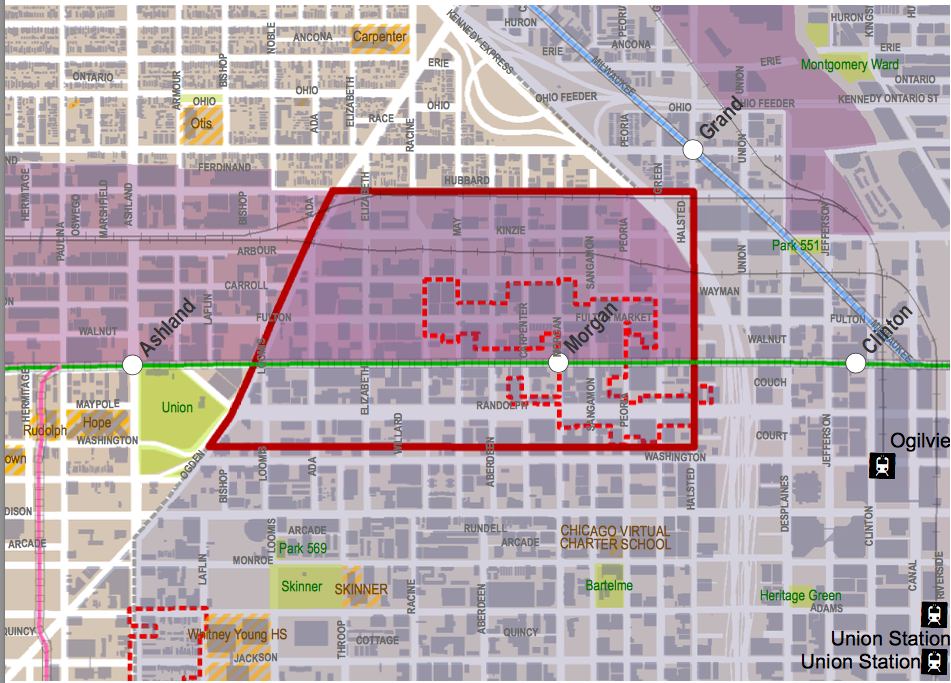